Melrose B’nai Israel Emanu-El is the small, haimish, traditional, egalitarian congregation that extends warmth and welcomes a range of diverse ideas so that people of all ages will know they are valued, participate and feel spiritually uplifted. We are a United Synagogue for Conservative Judaism (USCJ) congregation

We invite you to join our warm and welcoming community: The Little Shul with a BIG Heart!

Shabbat Morning, January 25
On the Bimah

MBIEE is experiencing a dramatic increase in membership - remarkable in an age of shrinking memberships in most other conservative synagogues in our neighborhood.  Join the crowd!  Contact membership chairman, Sharon Sussman (vp-sussman@mbiee.org) or call the synagogue office (215-635-1505) 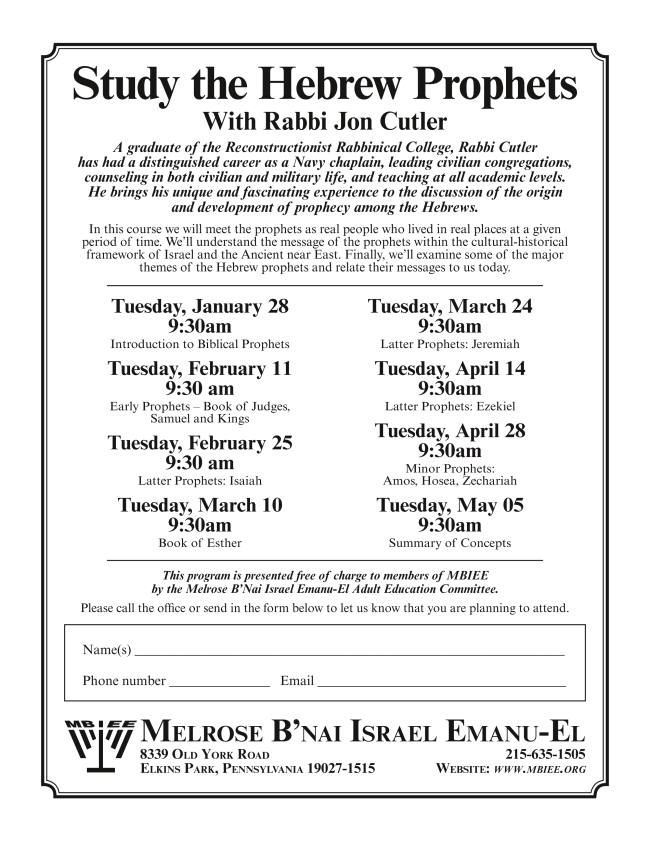 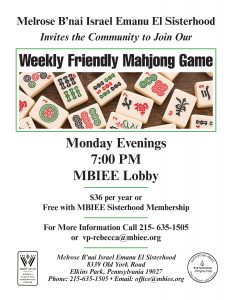 The latest issue (Hanukkah issue) was emailed and snail-mailed to all congregants in early  December.  The next issue is scheduled for distribution late January - early February. All previous issues are available for reading or downloading on this web site:

Current and past issues of the Shofar

Active Listening Devices have been installed and are ready for use in our sanctuary.  You may reserve one by calling the office (215-635-1505) or contacting Fran Sion (vp-fran@mbiee.org) or Sandy Pinsly (spinsly@verizon.net).  The upgrading of the sound system of our sanctuary is now complete with the recent installation of speakers in the rear of the room.  Everyone should now be able to hear clearly from any section of the room.

Do you have ideas on how to improve our web site? Click Feedback on the top of the home page. If we use your suggestion, you will win a box of frozen latkes to eat next Hanukkah. Would you like to help build or edit our web site?
Contact: webmaster@mbiee.org. 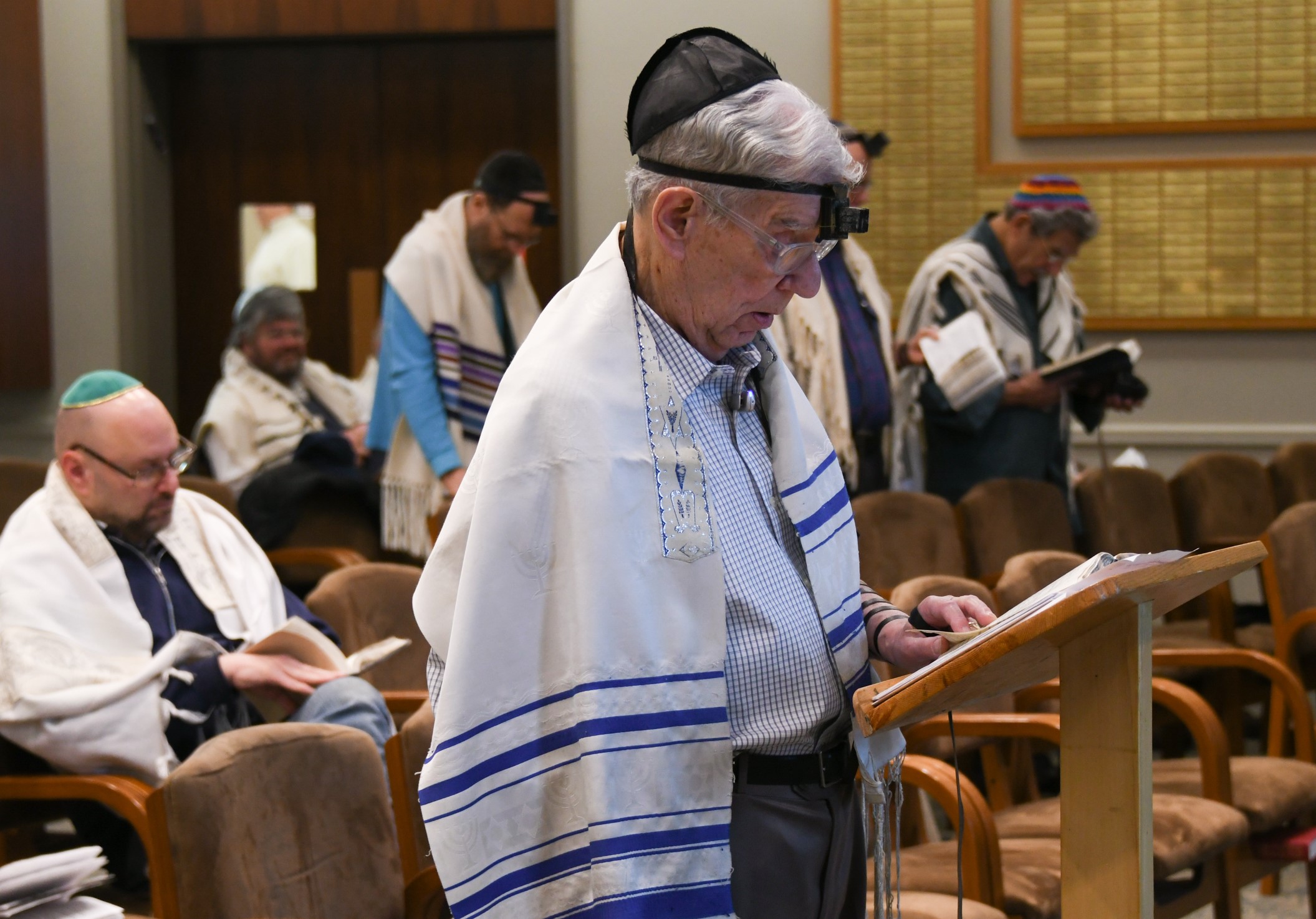 Over the last few years, Melrose B’nai Israel Emanu-El in Elkins Park has experienced significant growth. I know there are lots of reasons — our move to the Old York Road corridor, an inviting space, the demographics of the community, and a growing number of people searching for a place to call “home.”

Digging deeper, I think something else is happening here. In my opinion, part of the reason for our growth is that we are providing an authentic response to many people who are uprooted spiritually. There is a certain comfort level in allowing the past — the liturgy, words, melodies, rituals and ceremonies — to inform the present and the future.

The sameness brings a level of comfort to many of us. There is a peace that comes with the continuity — knowing that the prayers we say, the words we recite, the songs we sing, are the same or very similar to what our parents, grandparents, great-grandparents uttered.

I grew up in Philadelphia. My neighborhood, “D and the Boulevard,” was home to a traditional conservative synagogue, B’rith Israel, where my family belonged. And even though it is no longer a synagogue, to this day when I drive down the Boulevard and I see the building, I pine for those days. I don’t think it’s just hollow nostalgia. I can still hear the voice of the cantor, the sound of the shofar; I can remember the faces of my friends who would stand on the front steps of the synagogue. People wishing each other “Gut Yontif.”

Many of you, I imagine, understand my feelings and have your own warm memories of the synagogue you grew up in. While Melrose can’t recapture your synagogue of yesterday, we remain committed to tradition and rituals that for centuries have provided meaning to the Jewish people. Melrose understands simply because something was “yesterday” doesn’t mean it is irrelevant. We are dedicated to maintaining as much as possible this celebrated and sacred past, while at the same time engaging the present.

While acknowledging our beautiful past and present, we also look to the future. I am so proud and honored to be the rabbi of Melrose, and especially proud when people tell me how welcoming our community is, friendly and warm. And that warmth has made new people want to return time and time again.

My friend the late Leonard Fein writes about the importance of a synagogue community: “At times of a faceless community, where people still feel connected by a culture of reciprocal responsibilities… The importance of being ready, at any moment of any day, to be the 10th person in a minyan, to be the person who makes the difference in transforming an aggregation of people into a purposeful cohort.”

Rabbi Charles Sherman is the spiritual leader of Melrose B’nai Israel Emanu-El in Elkins Park and the author of The Broken and the Whole: Discovering Joy After Heartbreak (Scribner/Simon and Schuster).

A graduate of the University of New Hampshire with a BS in Music Education, he taught elementary classroom music in the Andover, MA Public Schools for seven years before entering the cantorate on a full-time basis in 1982.

He received his cantorial training under the tutelage of the late Cantor Gregor Shelkan and the late Cantor Zvee Aroni. Cantor Freedman served congregations in Worcester, MA, Miami, and Cranston, RI before coming to Temple Sinai (Dresher) in 2001; he served that synagogue until 2019.

An accomplished folksinger and composer, several of Cantor Freedman’s compositions have been published by the Cantors Assembly. In 2006, he was honored by Shalshelet – The Foundation for New Jewish Liturgical Music, for his composition Esa Einai. An active member of the Cantors Assembly, Cantor Freedman served as Chairman of the Delaware Valley Region for three years and has served nationally as a member of the Executive Council and of the Publications Committee.

He and his wife Randi are the proud parents of a blended family of eight children.

Cantor Freedman has released four recordings. Many of his compositions have been published by the Cantors Assembly of which he is a proud member. In 2018, Cantor Freedman was awarded an honorary Doctor of Music degree by the Jewish Theological Seminary of America.

Cantor Freedman was revered by his congregants at Temple Sinai; here is a sample of their reactions to his work:

Ari Sussman, son of MBIEE vice president, Sharon Sussman, recently received the Leonard Bernstein Fellowship in composition. A piece that he composed was performed in Tanglewood, summer home of the Boston Symphony, in western Massachusetts. 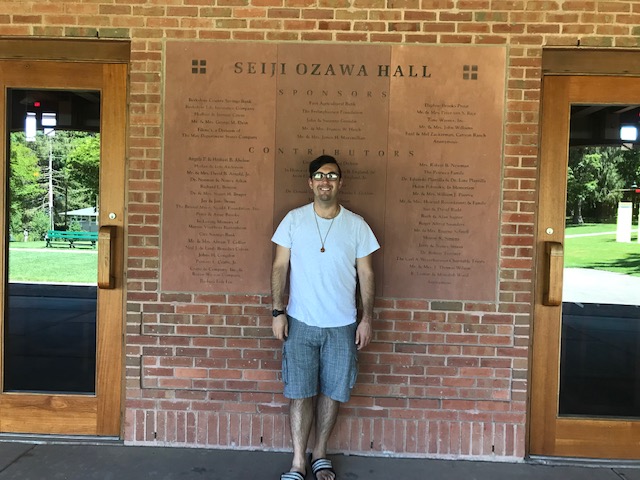 To Emiliana Guereca and Deena Katz, Co-founders Women’s March L.A.
Dear Emiliana and Deena,
There’s a rabbinic dictum, Dan lkaf zchut, give every person the benefit of the doubt. And that is what I did this past week and today. I booked a hotel room from Friday to Sunday in order to observe Shabbat downtown and stand for equality and the ability for women and men to join together to give voice to those unable to speak. However, I was assured by you, the founders of this March, countlessly in a private meeting, that this March was different. That in Los Angeles (unlike the National March) Israel would not be attacked, labeling Israel as an apartheid state would be unwelcome on the stage and if a speaker went off script, the managers of the program would raise the music. In the very first hour of the Women’s March L.A. program at Pershing Square, all those promises were broken.
Marwa Rifahie, representing the Council on American-Islamic Relations used her allotted time to focus on the Palestinian agenda, a conversation that I was told would not be a focus. I waited. When she called Israel an apartheid state…I waited. Where was the music? Where was someone asking her to remain on script? Who vetted this speaker? Why was I assured that anti-Semitic statements would not be permitted or tolerated in this anti-hate arena? Why was someone allowed to defend the organizers of the march in Washington? I used my voice, opinion and reputation to defend you, the founders that assured me, a Jewish woman was welcome and needed. I know I’m needed but today, I was not welcomed.
My family and I left the March immediately after we heard this woman’s rhetoric. Almost meant to be, I ran into you, Emiliana and voiced my dismay, disappointment and sense of betrayal. I explained that Jewish leaders were assured time and time again to trust you; that I was personally promised that the agenda would not include hate against Israel, that the scheduled speakers would be screened and if off message, monitored and kept on script. And you, Emiliana apologized and hoped the next three hours of the March would look different. Perhaps I was meant to be at the March just to have this conversation and potentially prevent hate speech from infiltrating the remainder of a program that should focus on a united bipartisan cause of cultivating a nation where women feel heard and protected. But now, as a woman, mother and rabbi, I feel dejected, embarrassed and misled.
Other Jewish women around me said, “That’s it. This is my last March.” Help me. Help me to bring Jewish voices into this fold. Help me to trust you again. Help me understand and believe that when you invite a lover of Israel to a march for women, my people won’t be attacked.
If you want me back at next year’s March, someone like me better vet and screen your speakers. Someone like me must be willing to say anti-Zionist speech is the language of hatred and won’t be allowed on stage. But until you take this course of action, it will be quite a while until I give someone like you the benefit of the doubt.
I held a sign that read, “Jewish and Proud Zionist standing for women’s equality.” My daughter’s sign read, “I march for kindness.” I hope to find a place where those signs are welcome and not attacked. It’s with the heaviest of hearts, that I admit I was wrong. This March was clearly not meant for me.
I pray, next year, teshuvah, great repentance and change is taken to win back my trust. But today was not a day for all women, all people, all creeds and voices. When Israel is publicly attacked, my voice is silenced. I will not be silenced.
If you want to learn how to include me in ensuring hate against Israel isn’t on next year’s agenda, I’m all ears. Until then, this March is over.

Your comments on this article are welcome.  Just click on Feedback on the menu at the top of the page.  Please use proper language and common sense in your replies.